It has been a while since I uploaded any sort of content or posts on my blog.  I took a break from blogging to focus on my dissertation and university work, as I'm a final year student and had a lot of work to complete over the last few months! But now I'm back (not sure for how long) and have a few posts lined up for the next few weeks so, hopefully, I'll get the motivation to start blogging again and get back into the swing of things ❤

Here is another Monthly Music Playlist! 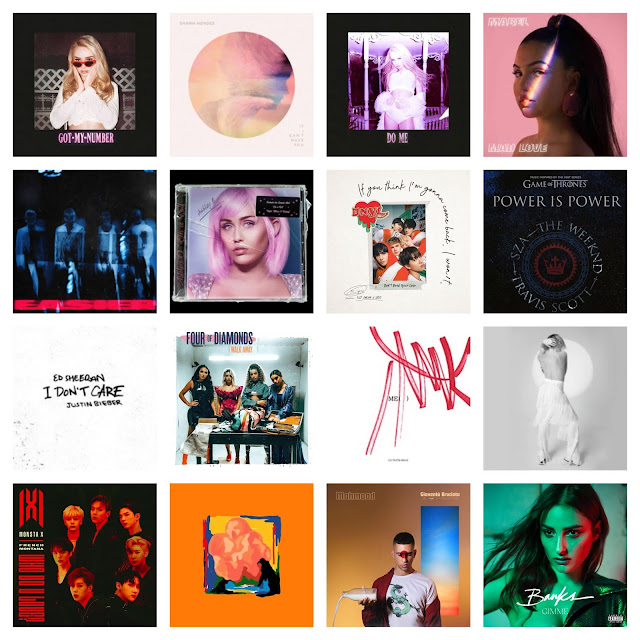 Han Pan - Original Mix by Peggy Gou
Body Funk - Edit by Purple Disco Machine
Boy With Luv by BTS feat. Halsey
SOS by Avicii and Aloe Blacc
If I Can't Have You by Shawn Mendes
White Roses by Charli XCX
Hey DJ - Remix by CNCO, Meghan Trainor and Sean Paul
Started by Iggy Azalea
Power is Power by SZA feat. The Weeknd and Travis Scott
Contra La Pared by Sean Paul and J Balvin
Hold Me While You Wait by Lewis Capaldi
Stay (Don't Go Away) by David Guetta feat. RAYE
Sweet Sunshine by NUUXS
Baby Baby by WINNER
Eclipse by Loona
Soldi by Mahmood
Roi by Bilal Hassani
Spirit in the Sky by Keiino
Too Late For Love by John Lundvik
Arcade by Duncan Laurence
I'm High by Slayyyter
Sir Duke by Stevie Wonder
I Don't Care by Ed Sheeran with Justin Bieber
Find U Again by Mark Ronson feat. Camila Cabello
Mamita by CNCO
Bonita by CNCO
Do Me by Kim Petras
Got My Number by Kim Petras
All I Do Is Cry by Kim Petras
Never Really Over by Katy Perry
D.R.E.A.M. by Miley Cyrus feat.Ghostface Killah
Nightmare by Halsey
Glad he's Gone by Tove Lo
About You by FLETCHER
Summer Days by Martin Garrix feat. Macklemore and Fall Out Boy
Old Town Road - Remix by Lil Nas X and Billy Ray Cyrus
Rescue Me by OneRepublic
Easier by 5 Seconds of Summer
Ritual by Tiësto feat. Jonas Blue and Rita Ora
Grace by Lewis Capaldi
Mad Love by Mabel
Friend of a Friend by Lake Malawi
Gimme by BANKS
Forever by Lewis Capaldi
Naked Alone by L Devine and INDIIA
One by Lewis Capaldi
No Drama by James Hype feat. Craig David
The First One by Astrid S
When You Know What Love Is by Craig David
Too Much by Carly Rae Jepsen
On A Roll by Ashley O
B Brent by FRANC3
Big Plans by Why Don't We
Walk Away by Four of Diamonds
Díganle - Tainy Remix by Leslie Grace, Becky G and CNCO
Take Off by WayV
Zimzalabim by Red Velvet
Fosho by Skull, Koonta, MION and Vigorman
Don't Need Your Love by NCT DREAM and HRVY
Times Won't Change Me by Circa Waves
Who Do You Love? by Monsta X and French Montana
Bounce Back by Little Mix
Someone You Loved by Lewis Capaldi
Bruises by Lewis Capaldi
Cross Me by Ed Sheeran feat. Chance the Rapper and PnB Rock
All Day and Night by Jax Jones, Martin Solveig, Madison Beer and Europa
Just You and I by Tom Walker
Outta My Head by Khalid with John Mayer
Feedback by BoA and Nucksal
Ah Yeah by WINNER
Superhuman by NCT 127
ME by CLC
When You're Ready by Shawn Mendes
Tequila by Dan + Shay
Attitude by Aaron Carpenter
Gotta Go by Zack Knight

What songs are you playing on repeat this month? Let me know in the comments below!

I hope you've had a great week! I've been stuck in the library all week writing my dissertation and getting on with a lot of uni work while it's Easter break! Which means a lot of the time I'm listening to music while I'm doing my work, so for today's blog post, I'm back with another Monthly Music Playlist for you guys!

If you have any music recommendations let me know, as I'll be needing some new music to listen to while I'm in the library ❤ 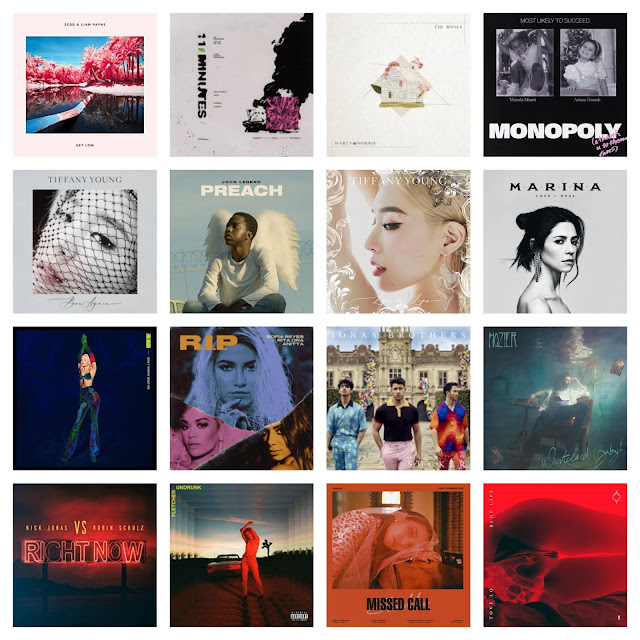 2 Souls on Fire by Bebe Rexha feat. Quavo
Sucker by Jonas Brothers
Please Me by Cardi B and Bruno Mars
Right Now by Nick Jonas
shedontknowbutsheknows by Tove Lo
Undrunk by Fletcher
Enemies by Lauv
Longer Than I Thought by Loote feat. Joe Jonas
Blue by Samuel Larsen
You Should Know by Samuel Larsen
The Bones by Maren Morris
Missed Call by Jiselle feat. Chancellor
Don't Feel Like Crying by Sigrid
I Can't Get Enough by Benny Blanco, Selena Gomez, J Balvin and Tainy
Con Calma by Daddy Yankee feat. Snow
R.I.P by Sofia Reyes feat. Rita Ora & Anitta
My Bad by Khalid
EASY by WheeIn feat. Sik-K
ghostin by Ariana Grande
MONOPOLY by Ariana Grande and Victoria Monet
Don't Worry Bout Me by Zara Larsson
Sally Walker by Iggy Azalea
So Am I by Ava Max
Good Form by Nicki Minaj
Boy Afraid by Saro
Get Low by Zedd and Liam Payne
bad guy by Billie Eilish
Radio by Taet
Beautiful by Bazzi
Want by Taemin
Twit by Hwa Sa
you should see me in a crown by Billie Eilish
all the good girls go to hell by Billie Eilish
Holding out for You by Fedez feat. Zara Larsson
Loca by Favorite
11 Minutes by YUNGBLUD with Halsey, feat. Travis Barker
Who Do You Love by The Chainsmokers with 5 Seconds of Summer
Kill This Love by BLACKPINK
Play It Cool by Steve Aoki and Monsta X
Bomb Bomb by KARD
Bitter Love by Pia Mia
Dinner & Diatribes by Hozier
Here With Me by Marshello feat. CHVRCHES
Insomnia by Daya
Nobody by Martin Jensen and James Arthur
On My Way by Alan Walker feat. Sabrina Carpenter and Farruko
Last Hurrah by Bebe Rexha
Talk by Khalid
Superstar by MARINA